Like many people, I’ve probably gotten thousands of business cards over the years. For at least 8 years I carried a Franklin Planner, but by 1998 I went digital. I’m also a bit of a contact-hoarder. I make notes for many of the contacts I make, because I like to go back to give business to people I’ve actually met in person, or when someone else says that they need someone for a particular service, I like to connect people.

Over the years I’ve tried entering all of these cards into my contact list, but now and then I get lazy and they get tossed into a box with dozens (or hundreds) of other cards. I’ve looked for solutions – and there are plenty out there – but I didn’t really want to buy a business card scanner, as scanners are kind of out-dated today. Smart phones can take photos at such high resolution, and OCR is pretty common.

I’ve been looking for an mobile app-based option, or even a desktop application that would quickly take an image, read the edges of the card, crop it, then convert the characters to text and hopefully import the information into my contact list. (I use Google Contacts) Oh – and I’m somewhat paranoid / I don’t trust most app developers, so anything that was a mobile app needed to have REALLY limited permissions. What I found were LOTS of mobile apps that wanted WAY too much access to my device. What I really hoped for was something that would just create a vCard file that I could then import – which means the app doesn’t have (or need) access to my contact list. Most people install apps without checking the permissions, which is begging for a not-so-honest app developer to scrape a user’s information – and contact lists – for the purpose of spamming or phishing all their contacts. I’m not one of those people. At least now, the latest versions of Android give users much better control over their device, so they can disable access to each part of their phone, for each application. 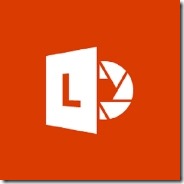 Several apps on the store had some of the features I wanted, but they wanted way too much access. Then I found articles talking about how LinkedIn use to have a tool called “CardMunch”, but they shut it down and sent it to Evernote. I’m a OneNote guy, so I wasn’t too keen, but I downloaded the latest desktop and mobile version of Evernote, then went hunting for the ‘business card scanner’ feature. Guess what? Now it’s a paid feature. 10 seconds after I saw that, Revo was removing any trace of Evernote. Then I remembered that OneNote does OCR on images you add to pages, so I started reading up on that. It turns out, Microsoft has recently partnered with someone to release “Office Lens” for Android, iOS and Windows, and it integrates with OneNote – AND, it creates a vCard! Wow… they read my mind!

After playing with it for a few minutes, I setup my phone on the desk, connected to the phone via TeamViewer so I could go faster with the mouse and keyboard, and within 10 minutes, I had scanned over 40 cards that had stacked up on my desk. Wow. I was impressed. It isn’t the best solution out there, but for free and fairly easy to use, it’s a winner! 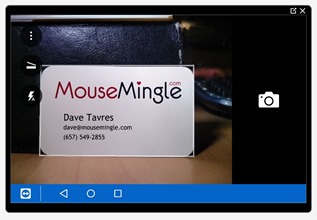 Step 2 – Check the image, save or delete it. 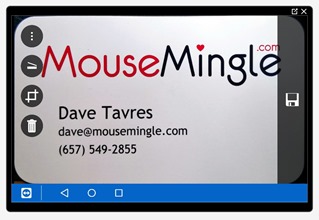 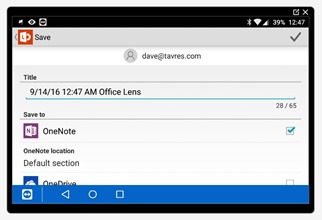