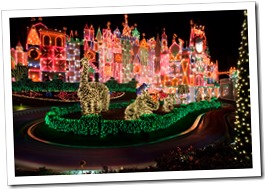 As a former engineer on the Disneyland Railroad, it should be obvious that I love trains – small and large. I’m also a huge Disneyland and Walt Disney fan. I’ve talked about this idea for several years, but never wrote it down.

The popularity of Disneyland’s “It’s a Small World Holiday” and “Haunted Mansion Holiday” has grown tremendously since they started, and guests sometimes come to the park just to see the make-overs of those attractions. “It’s a Small World Holiday” is such a draw that one of the most popular tours, “Holiday Time at Disneyland”, constantly sells out and culminates with seats right in front of the attraction for a show.

Now, back to the train idea… the Disneyland Railroad has always been popular, partly because most children have never ridden on a real train before and partly because all five locomotives are actual narrow gauge steam

engines – that is, they boil water to build up steam which powers the pistons that move the wheels. Well… that and, people just love trains! So, with the whole of Disneyland being decorated for the Christmas, it only makes sense to decorate one of the train sets too.

Decorating just ONE of the consists would be perfect! Awesome Christmas lights on the engine, tender, and every car… a special holiday spiel… and most important – snow machines on BOTH sides of each car, so that it looks like it’s snowing when you’re taking the Grand Circle Tour! It would be a perfect addition to Disneyland for the holidays! And there’s no doubt that people would WAIT in each station just for that train set to come around.

Right now, each locomotive has it’s own batteries to power the block light safety system and play the audio spiel for the passengers. Train sets have an onboard generator connected to the turning wheels of the first passenger car, so adding another generator to the last car just to power light setup and snow machines shouldn’t be that difficult.

The way Disney does things, putting lights, decorations, snow  and a holiday-themed audio spiel and music would make the Disneyland Railroad an amazing addition for the holidays!